The Republic of South Africa 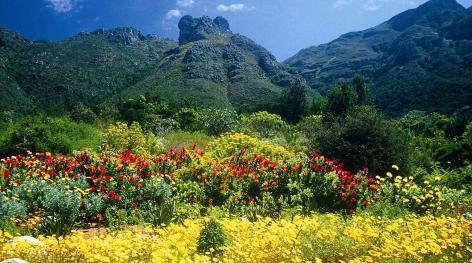 This June as South Africa braces to hold the first major global event on African soil, the FIFA World Cup, many people from around the world will visit this country. Many will come for adrenalin as fans of following 32 teams qualified for the final tournament. But most will stay for adventure and experience some truly exceptional sights.

The East South African Coast has a subtropical climate influenced by the Indian Ocean; the West Coast is cooler due to being at the Atlantic Ocean, becoming hot and dry towards Namibia. The Two seas meet at Cape Agulhas, although many believe it to be at the more scenic Cape Point at the tip of the Cape of Good Hope.

The best places to visit in South Africa include the stunning coastal towns of Hermanus, Cape Town, Knysna and Durban. Cape Town, the legislative capital of South Africa, is a highlight of any trip to Southern Africa. It is also one of the most culturally diverse cities in Africa and has a reputation for social tolerance. The natural beauty of Cape Town makes it one of the most attractive cities in the world. In the middle of the town is a flat-topped mountain forming a prominent landmark overlooking the city; that is Table Mountain, home to more than 1400 unique species of plants as well several mammals and over 100 invertebrates. From it’s top you can even see Robben Island where Nelson Mandela was imprisoned for 18 years. Cape Town boasts beautiful beaches some of the best in the world, so if you’re a sand-and-sea lover be sure to take some time out to relax and soak up the sun.

Cape Town boasts beautiful beaches as well as the impressive Table Mountain right in the heart of the city. The restaurants are world class, and so are the wines. Cape Town is also one of the most culturally diverse cities in Africa and has a reputation for social tolerance. When you visit Cape Town you’ll see a huge slab of sandstone, 1086m high and 3km long, smack in the middle of town. Table Mountain’s top is often shrouded in clouds commonly known as the mountain’s “tablecloth”. The mountain is home to more than 1400 unique species of plants as well several mammals and over 100 invertebrates. The views of Cape Town and its coastline from the top are spectacular (if the mountain doesn’t have it’s tablecloth). You can even see Robben Island where Nelson Mandela was imprisoned for 18 years.

The Victoria & Alfred Waterfront, in the historic heart of Cape Town‘s working harbour, offers a variety of shopping and entertainment options to visitors, intermingled with office locations, hotels (such as the historical Breakwater Lodge – once a 19th century prison) and luxury apartments in the residential marina. It houses the Nelson Mandela Gateway which offers boat trips to Robben Island, as well as the Two Oceans Aquarium.

If you want to see a colony of African Penguins go to Boulders Beach, near Cape Town. It’s a good spot for kids and while the main population of penguins are now separated from the swimming beach, there are still plenty of penguins who will swim alongside you.

Cape Town is home to some exceptional golf courses, many designed by internationally acclaimed players and all in all set in beautiful surroundings. Cape’s winelands are some of the most scenic in the world with its restored Cape Dutch farmsteads with their distinctive gables and thatched roofs, and the mountains that form the dramatic backdrop to all of this. South African wine has come of age and is now competing on the world wine stage.

The Garden Route is breathtakingly beautiful and densely vegetated stretch of the south-eastern coast of South Africa. It comprises 200km of indigenous temperate forest, pine plantations and thick fragrant bush known as “fynbos”, beneath the Tsitsikamma and Outeniqua mountains, running alongside rocky coves, glorious sandy beaches, a few lakes, lagoons, gorges and mountain passes. And with outdoor sports and delicious local food, there’s plenty of entertainment along the way. Although the most popular exploration of the Garden Route is by car, it is also the site of Africa’s last remaining passenger steam train, the Outeniqua Choo Tjoe.

No holiday in South Africa is complete without a visit to Zululand, the home of the legendary Zulu people. It lies a few miles north of Durban and the drive there, just for the sake of the lush vegetation, is a sight worth seeing. Their culture and tradition are deeply entrenched and still wildly current, even today. However, caution must be taken. Like many places in South Africa, it is not always safe.

The largest city in South Africa, Johannesburg is also the wealthiest and, without doubt, the economic powerhouse of Africa. the world’s richest gold fields were discovered in Johannesburg during the 1880s. The large black townships of Soweto and Alexandra lie within Johannesburg’s metropolitan area. Soweto may not be the most beautiful place you visit in South Africa, but it certainly ranks among one of the most important and interesting sights in the country as much of the struggle against Apartheid played out in the slums this township. Also one can visit the Apartheid Museum, located in Ormond, Johannesburg which is acknowledged as the pre-eminent museum in the world dealing with 20 th century South Africa , at the heart of which is the apartheid story.

North of Johannesburg there is Africa’s oldest established wildlife park (1898) called Kruger National Park, that boasts the highest variety of wildlife in Africa, which includes the “Big Five,” hippos, crocodiles, giraffe, cheetah, and much more.

About two hours’ drive from Johannesburg there is a luxury casino and resort Sun City. With a combination of features unmatched anywhere, it boasts magnificent sporting and recreational facilities including 2 world class golf courses, and the magical Lost City water-park, The Valley of Waves. Complete with white sand beaches, river tube rides, wave pool and waterslides, it’s simulated paradise at its finest and free for those staying at any Sun City hotel.

Safety tips: No vaccinations are required by law to enter South Africa. Both Typhoid and Hepatitis A vaccinations are highly recommended. Most of the main tourist destinations in South Africa are malaria free, making South Africa a particularly good destination to travel to with kids. South Africa has one of the highest rates of HIV in the world so please take precautions if you are planning to have sex. Although there is a high crime rate in South Africa it is mostly restricted to the townships and not tourist areas. You should be careful when changing large amounts of money, make copies of your passport and keep them in your luggage and just be careful about walking around at night especially in the major cities.

For accomodation: http://www.where2stay-southafrica.com/ that provides a wide range of holiday venues from Hotels, Game Reserves, Guest Houses, Bed & Breakfast, World Cup Accommodation and Self Catering accommodation to match your every need.